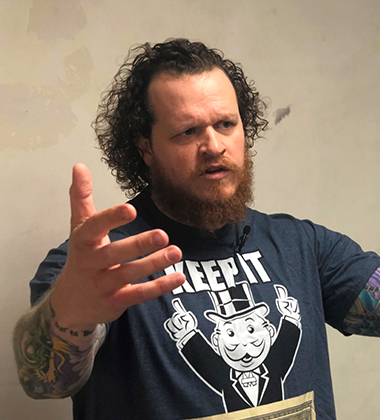 If creative real estate had a Jedi Master, Chuck would be Yoda.

Charles M. Kohout AKA The Chuck, is a successful investor, entrepreneur salesmen, educator

with no formal training. Chuck has an incredible drive and habit of succeeding in almost

everything he does wile learning from his few failures. Chuck possesses an uncanny ability to

influence and sell to those who grace his presents, along with a seemingly supernatural ability to

manage stress and pressure. Shit just doesn’t seam to bother this guy, and he finds the good in

everything. Chuck has literally grown up in the world of business. He has spent his life running

a number of companies. It’s been in his blood since before he could see over the counter in his

father’s bakery. He seemingly does not know the difference between business and pleasure

because to Chuck they are one and the same. He has become and evolved over the years into the

living embodiment of what a fearless leader should be, with accolades not limited to and

before the age of 30, National Public speaker, platform closer and the Nations leading expert

on the Absolute Assignment of Rights. Just to name a few. He is truly the embodiment of

everything an alpha male should be.

Chuck founded his first company Salvation Home Buyers LLC, in 2004, a company that

functions as a hybrid of a real estate holding company, which allowed him to leave the

workforce and never look back netting in excess of $200,000 in its first year of business. Years

later and over one thousand transactions the company still is in existence and profitable today..

“I had created the financial part, but the freedom still eluded me. So I sat down for a weekend

on vacation. I honestly had no idea the impact of dumping my head on paper would have on the

investment community. The thing read more like a cook book with all the ingredients needed for

4 basic successful nothing down no credit transactions.”

Shortly after Chuck booked 3 weeks in Hawaii with his 1 st future ex wife, left the company in

the hands of Linton Gentles and his band of merry misfits. To his amazement, the company not

only ran and made money, but actually did better when chuck was hands off. Stories of this

begged and bribed for his secrets Chuck knew it was time to sell. In 2007 chuck founded

the box and bridged the gap between all the late night TV, YouTube Gurus selling bullshit that

did not work and wasn’t state specific

“It was crazy! I was surrounded by Fortune Builders victims and those who had found anything

but financial freedom as they took on more debt by attending Rich Dad classes. It’s like these

to drive the real estate investment community deeper in to debt! I don’t know if I was that smart

and was able to find a way or if I just fought that hard. But I think it may be the latter of the 2”

just under 2 million in bad debt.

Applied Education tanked. He was all like OMG how are you going to make a living?!? I

was all like LOL. You think I really make that much money off speaking? It’s just fun,

like a reward for people who can actually do this. Probably the closest thing I’ll ever do

to being a rock star, you get laid a lot too! guess I’m Just going to kick back and keep

doing what I teach. Time to go back to my roots now and keep turning houses. Truth be

told the real money Is in real estate.”

After years of fighting to rebuild, Chuck reluctantly filed for bankruptcy and rebuilt his

in a matter of months. It was then Chuck decided to do something he had yet to

experience. He made the conscious decision to live life. But after traveling the country,

the world, even starting a family, something was still missing.

“I had taken off most of my 30’s, Life had become the definition of unfulfilling. For

years I had define success as, waking up when you were done sleeping. It’s been said

A ship in harbor is safe, but that is not what ships are built for. I had literally checked off

every box on my bucket list. Maybe I just set the bar too low? But something was

alpine style mountain climb that it clicked! It wasn’t about the money. It was about the

rush and the excitement that came with victory. Creative Real Estate transactions and

doing but most perceived as impossible fulfilled part of Chuck’s inner being.

“I didn’t care about money, I cared about glory! Closing a transaction that most would

deal and set them on a new life path meant more to me than the day I made millionaire.

It was the same feeling I got from dominating opponents on the Matt, summiting some

of the highest peaks, wrestling alligators, rescuing swarms of wild bees or bringing

home attractive woman 2 at a time. I accepted I was an adrenaline junkie”

Witch brings us to today.

After ignoring all the signs and symptoms of Lyme disease and several other tropical parasites,

Chuck ended up neurologically paralyze in the summer of 2016. Unable to walk or move from

his hospital bed for 10 days. Spending months with a home care nurse, and the next few years

depressants that lead him down the dark path to years clinical insanity, Chuck managed to make

“My body didn’t work like it used to. And though I can’t remember any of it, I’ve seen the

pictures of the lines out side my hospital room and the people jam packed inside, friends family,

students, sellers and investors alike. To this day my team of doctors is amazed, I guess I did a lot

It was latter in the recovery process that Chucks Neurologist handed him an un-signed card. It

You’ve done so much for so many people. Please stop finding new and exciting ways to try

kill yourself. We love and we need you.

To this day it’s unclear who the card came from. That same day Always Be Closing LLC was

perpetuating his legacy his scholarship fund and much more. I

link to chuckkohout.com and longer Bio

the ground or take your investing to the next level.